The Tank resembles the stereotypical tank. It has four wheels, (without tire tracks however), has an armored exterior, and is equipped with a main cannon at the top. The player's head sticks out of a hatch at the top of the Tank. The Tank has low speed, and acceleration, and is one of the least agile cars in the game. However, it has medium handling, high durability, and is one of the strongest cars in the game. It's main cannon is also a useful weapon to either hit the opponent with, or to aim and shoot a projectile that can also hit the opponent.

If you are looking for a heavy stable vehicle with considerable strength, and have no interest in doing stunts and would rather avoid flips, then the Tank is the vehicle for you. It's lack of traction and weak engine are sometimes frustrating, but the Tank makes up for it in other ways. The Tank is also the strongest of the Shooting vehicles, and is the most durable out of the four. It's cannon juts out and provides it a jousting advantage found only in a select few cars such as the Horse and Forklift. The Tank is also considerably difficult to kill, as not many vehicles can pull off the stunts required to land on its head. Most of the ways to kill it require taking advantage of its non existent agility and to lure it into a trap from which it can't escape. The Tank appears to have many disadvantages when first played, but it relies on its ability to kill fast to dominate the playing field. Overall, the Tank is an excellent vehicle, and Drive Ahead players hold it in high regard, as it appears as the #1 vehicle on many players' lists and holds high positions in many others. 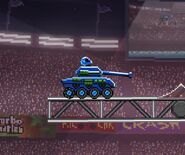 The Tank in a match.

The Tank driving.
Add a photo to this gallery
Retrieved from "https://drive-ahead.fandom.com/wiki/Tank?oldid=9907"
Community content is available under CC-BY-SA unless otherwise noted.